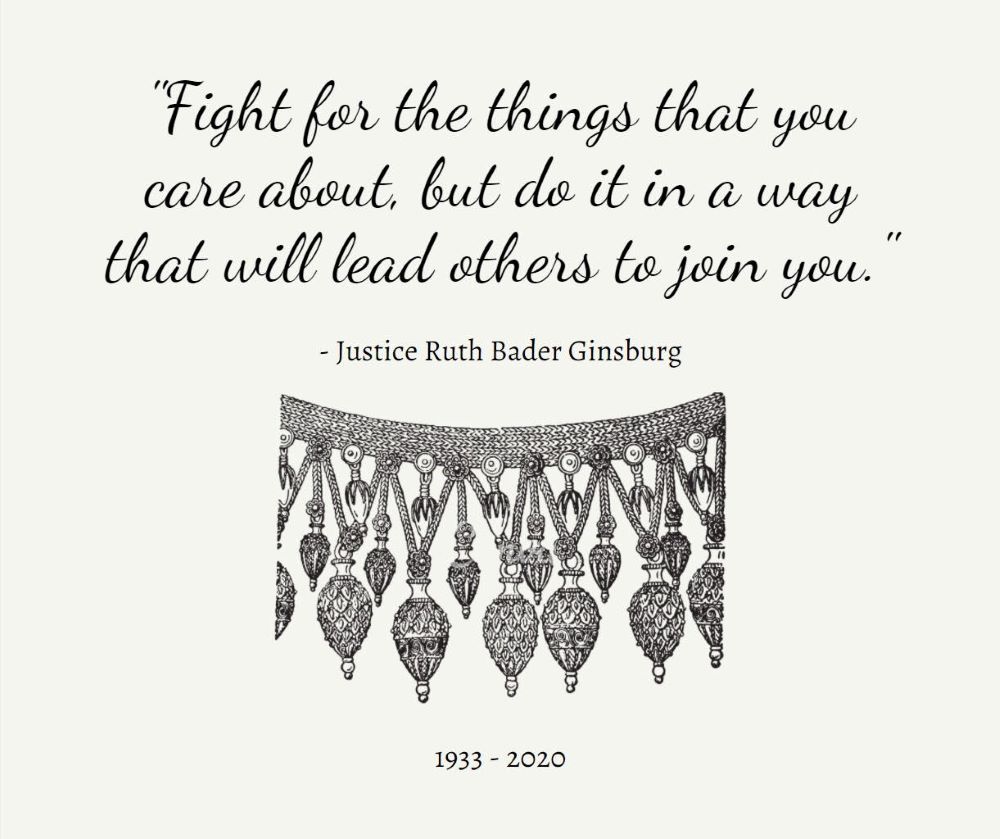 “We are at last beginning to relegate to the history books the idea of a token woman.” – Justice Ruth Bader Ginsburg, on her legacy.

We lost a legend this weekend.

“When I’m sometimes asked ‘When will there be enough [women on the Supreme Court]?’ and my answer is: ‘When there are nine.’ People are shocked. But there’d been nine men, and nobody’s ever raised a question about that.” – Justice Ginsburg

When Justice Ginsburg graduated law school in 1956, she was one of only nine women in a class of about five hundred. In 1993, she was nominated to be the second woman to serve as a Justice of the Supreme Court of the United States. Before she left us this past Friday, she was one of an historic three women to be serving concurrently on the country’s highest Court.

“Fight for the things that you care about, but do it in a way that will lead others to join you.” — Justice Ginsburg

Through her passion, vast knowledge, and ability to spot and fix injustices in America, Justice Ginsburg did her best to change stereotypes, include rather than exclude, and personify the definition of a true leader. She spent her career battling the discrimination she herself had faced so that women following in her footsteps would have rights and privileges she was denied.

“Dissents speak to a future age. It’s not simply to say, ‘My colleagues are wrong and I would do it this way.’ But the greatest dissents do become court opinions and gradually over time their views become the dominant view. So that’s the dissenter’s hope: that they are writing not for today, but for tomorrow.”

Justice Ginsburg authored the majority in United States v. Virginia, which held the male-only admissions policy at the Virginia Military Institute to be unconstitutional under the Fourteenth Amendment’s Equal Protection Clause. The decision paved the way for the striking down of similar policies around the country. But Justice Ginsburg may be best remembered for her dissents.

As just one of many examples, in Ledbetter v. Goodyear, the conservative majority ruled that the statute of limitations had run on a woman’s Title VII claim based on discriminatory pay. Justice Ginsburg dissented on the grounds that women often do not know they are paid less, and it is unfair to deny them protection from discrimination on the majority’s grounds. She called on Congress to amend Title VII to correct the injustice, and Congress did just that.

“Someone who used whatever talent she had to do her work to the very best of her ability. And to help repair tears in her society, to make things a little better through the use of whatever ability she has. To do something, as my colleague David Souter would say, outside myself. ‘Cause I’ve gotten much more satisfaction for the things that I’ve done for which I was not paid.” – Justice Ginsburg, on how she would like to be remembered.

Let Supreme Court Justice Ginsberg’s words remain in our hearts and drive the change in the world that she spent her life leading.